Home > cafe > Iwakura Myomanji-temple azalea is in full bloom, known to those in the know.

Iwakura Myomanji-temple azalea is in full bloom, known to those in the know.

"Fabulous mountain views.
Located in northern Kyoto.
Founded in 1389.
Moved to current location in 1968.
The Nichiren Buddhist Myomanji Temple far to the north of the Kyoto has wonderful views of Mount Hiei. There is a concrete copy of the famed stupa at Bodh Gaya, India, where the historical Buddha gained Enlightenment and a graceful statue of the Buddha within.

Myomanji has pleasant grounds of raked gravel to take in the fine views from the steps of the main hall.

Myomanji was founded by the Priest Nichiju in the 14th century and moved to its present location as redevelopment took place in the Teramachi Nijo area of downtown Kyoto.

Free admission to the temple precincts; admission fee for the Yukinoniwa Garden and main hall."

>Quoted from Japan visitor (URL below)

As a souvenir the beauty of the four seasons in Japan drawn on TENUGUI, Japanes… 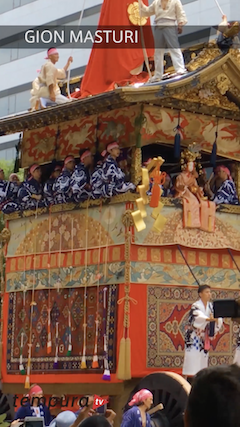 Hot summer in Kyoto starts with the Gion Festival